which is a fictitious sixth town in the Cinque Terre on the Ligurian Coast of Italy. We loved the book so much that a visit to this region immediately was put on the top of our travel list.

is made up of five towns; in order from north to south, they are; Monterosso Al Mare, Vernazza, Corniglia, Manarola and Riomaggiore.

We arrived at Monterosso Al Mare from Modena (with at stop and transfer in La Spezia) by train in July. When we got out of the train station, we were greeted right away by nature; the sea was right in front of us. If it weren’t for our luggage, we would’ve jumped right into the ocean!

[Tweet “Monterosso Al Mare is the only town of the five that is built on flat land”].

Monterosso Al Mare is the only town of the five that is built on flat land. It had the longest stretch of beach and the most restaurant and activity offerings. Our daughter, Bailey was 10 years old, so we thought the convenience of this town to be best suited for us and a family we were traveling with who also had a daughter a year older than ours, we found it to be the best town in Cinque Terre for families with kids.

First order of business was to find our hotel, Albergo Marina, which was a 15-minute walk from the train station to the old town.  It’s a quaint family-run hotel in a little nook of the old town.  The street where it’s located is extremely charming with its’ fine mix of a butcher shop, a place to get t-shirts and candles, and a store that sells jarred sauces and wines. The Marina Hotel was also great because they offered us daily tote bags filled with beach towels and snorkeling gear for free, this was great for Bailey and our friends’ daughter, who traveled with us. They also provided and guided us to the best hikes for us families with older kids.

Time for an Aperitivo

We dropped our bags immediately and headed out for aperitivo hour. After a few, we thought about going to the sea, but it was closing in on dinner time, so we decided to just do a Passegiata (evening walk before dinner).

Our walk didn’t last long as we were famished.  A portly man waved us into his restaurant; and when we asked him if he was serving fried anchovies, a dish the region is known for, he regretfully replied, no; but without hesitation, he took us next door and introduced us to the proprietor there.

At Ristorante Da Ely, Andrew and I ordered the fried anchovies and Bailey had the local pasta called Trofie with Pesto Sauce, which is also acclaimed in these parts.  This was washed down with a very light local white wine and water for Bailey of course.

After dinner, we walked the town again and “happened” upon an open-air makeshift theater right by the harbor, showing a movie documentary about the devastation of one village in this region named Pignone.

Watched a movie in the center of town.

The movie was in Italian but with English subtitles.  I felt like I was transported into one of my favorite foreign films, Cinema Paradiso – that’s when my mind started to relax and time had finally slowed down.

The next morning, our first full day, we walked through both new and old town to get acclimated. It was a very romantic walk as it was drizzling and one can really smell all the plant-life that surrounds.

Time for the beach in Monterosso Al Mare.

In the afternoon the sun came out and it was time to hit the beach!  We decided to treat ourselves and rented two chairs and an umbrella from Bagni Eden, a private beach in the Fegina (new town).  It was a great beach, mostly pebbled versus sand; the water was crystal blue, cool and refreshing and not very salty. We stayed for hours.  It was a great day spent.

Family Hike from Monterosso to Vernazza

The next day, we woke up for an early breakfast at the hotel and briskly got ready for a hike. The hike from Monterosso to Vernazza was purported to be the hardest of the hikes so we decided to tackle it first.

Our host, Marina, told us that the hike starts at the foot of the old town, ascending to where a four–star Hotel Porto Roca was located. We headed towards the hotel and saw a sign saying “per Vernazza”; which we followed.

Hike #2 is best for kids at the Cinque Terre

Ten minutes in, we approached a hut, where we had to purchase the tickets for hiking. The hike we took was labeled #2, which was the most organized hike, with red and white paint along the rocks to guide you to Vernazza.

We saw vineyards, lemon trees, some birds, geckos, frogs, different types of trees and flowers, lots of cacti; and we were immersed in nature.  This is a big deal to us city folk. The most exciting was to see small streams which were perfect for cooling down.

It was a very steep hike up for the first 45 minutes, but once we got to the summit, going back down was quite easy.  Although we had to be careful as it was on quite an incline at times and also slippery.

Seeing Vernazza at towards the end of the trail.

Soon, we, along with other hikers, started to see the town of Vernazza in the distance. We all started to get excited.  As we descended, a saxophone player was playing a welcome tune for the hikers!  We contributed to his stash of cash for making the entrance to Vernazza so magical.

As we touched down on the town, I checked my Fitbit for the number of steps we took – 8,829!  We made the hike in two hours as opposed to the hour and a half that everyone says it should take because I took so many pictures.

Where to eat in Vernazza after hiking Monterosso to Vernazza

Our appetites were worked up and we found the first place we saw under an umbrella and near the sea.  Gambero Rosso was its name and the staff was super busy but very attentive.  We again ordered the local white wine to quench our thirst. With the name of the restaurant being what it is, I rolled the dice and had fried shellfish.

I say this because I have grown an allergic reaction to shrimp as of late; but thought that maybe due to the climate and the breed of shellfish being different, the outcome would be more favorable. I thoroughly enjoyed my lunch; but by the time aperitivo hour came along, a trip to the pharmacy needed to be made.

When I asked to be prescribed something that will help my affliction,  I was told very stoically by the pharmacist, “that if I know I am allergic to shellfish, to simply not eat it”.  Andrew was on the floor and I, of course, had to heed her warning for the rest of the trip. Oh well…

The public ferry is the best way to transport from town to town in the Cinque Terre.

The ferry is the best way to travel around Cinque Terre

We took the ferry boat back to Monterosso, which was very special as one can really appreciate the coastline and its topography.

We never got to do another hike during our time in Cinque Terre; partially because of rainy conditions most mornings, and continual repair of the trails after the horrible October 25, 2011 storm (which the documentary I mentioned earlier is based on) that devastated this region.  However, because all five towns are built along the mountains,  just getting around was a hike.

I hope you add Cinque Terre to your travel list and bring the kids! They will definitely enjoy nature and the freedom.  If not going with kids, check out this travel guide to Cinque Terre without the kids. If you’ve been there, share your experience with us, we’d love to hear from you.

A couple of things to keep in mind, if you haven’t read Beautiful Ruins yet, do so. And if you’re allergic to shellfish, stay away from it.  Though you may want to roll the dice… it’s that good.

Getting to Cinque Terre by train:

Fly into Genoa Airport (North) and from there you can take the Trenitalia train to Cinque Terre, towards Pisa (South). The first stop from Genoa would be Monterosso Al Mare, then Vernazza, then Cornelia, Manarolo and last Riomaggiore. Make sure you know which way your train is headed. Also, make sure to validate your ticket on one of the yellow validating machines before boarding train. You can easily book the tickets when you arrive in Italy or you can click here to get more details and book your train ride from any city in Italy to Monterosso Al Mare.

Where to Stay in the Cinque Terre (Monterosso Al Mare):

In July 2014, we stayed at the Albergo Marina which is located in Monterosso Al Mare, in the old town. In our opinion, Monterosso Al Mare was the best of the 5 towns to stay in, especially for families with kids because it is the biggest one.

Which means more beach, more restaurants, and basically more conveniences. The hotel was fantastic. Its owners are very hands-on. They have wi-fi (although not extremely reliable at times), a mid-afternoon snack, breakfast, beach towels, equipment and tote bag – all included in the price.

TIP: if you are going to stay in this hotel, when you get out of the train station, just turn left towards the tunnel, walk through it and past the tunnel is the old town. There will be 3 streets the one all the way to the left is Via Buranco, that’s where you’ll find Marina’s hotel.

Where to Eat in Monterosso Al Mare:

Albergo Marina has a restaurant down the street, it’s tiny but the food and service were great.
Bar Midi is where we had cappuccino and machiatto everyday.

Enoteca Da Eliseo – we spent aperitivo hour here almost every day we were there.

Lanapo – Fantastic sandals – I bought a pair when I was there.

We’ve also partnered with Italian Fix, who has a fantastic, innovative e-book on travel to Italy. 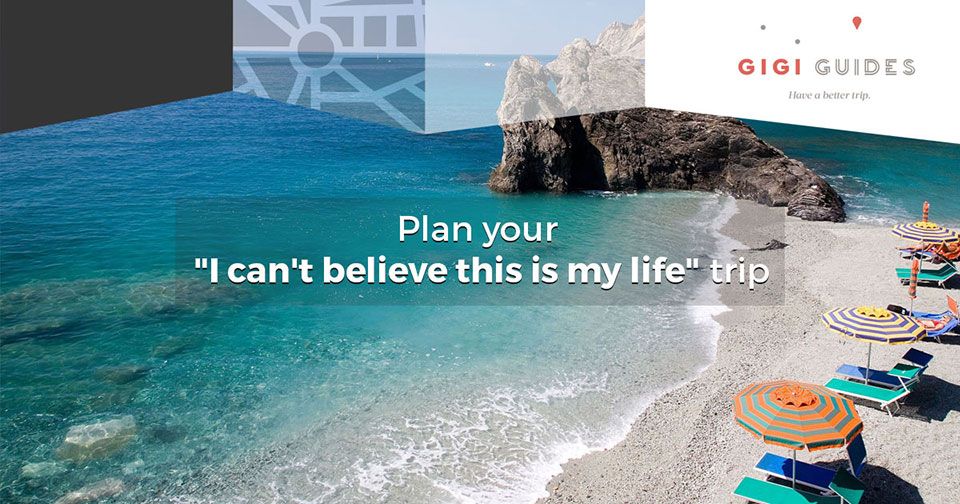 Books we read and used during our travels in Cinque Terre:

This website uses cookies to improve your experience. We'll assume you're ok with this, but you can opt-out if you wish.Accept Read More
Necessary Always Enabled